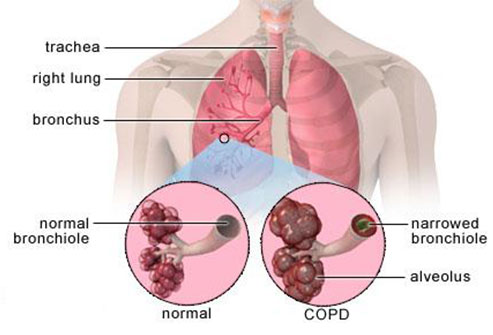 Chronic obstructive pulmonary disease (COPD) refers to chronic lung conditions that causes difficulties with breathing. It is a chronic
progressive disease most commonly caused by smoking. In India second most common cause is exposure to biomass fuel. Other important risk factors include environmental including both outdoor and indoor air pollutants. The problem with COPD is that many people often do not recognize the symptoms until the disease has progressed into its later stages. Shortness of breath or cough are mistaken as being from other causes.
Common symptoms of COPD include: Chronic cough, shortness of breath initially on exertion, fatigue,producing higher amounts of mucus than normal, wheezing. Mild COPD symptoms are typically ignored as it is a slow process and patients adjusts his lifestyle to make breathing easier.
The diagnosis of COPD is established by a simple test called spirometry in which the patient is asked to blow into a machine and his lung functions are checked. It is important to recognise COPD early as life
style modifications and treatment early in the course of disease can significantly alter its long term course. COPD cannot be cured, only managed through inhaled medicines, an external oxygen supply, and pulmonary rehabilitation. Thus it is of paramount importance to catch it early so that it progression is slowed down.